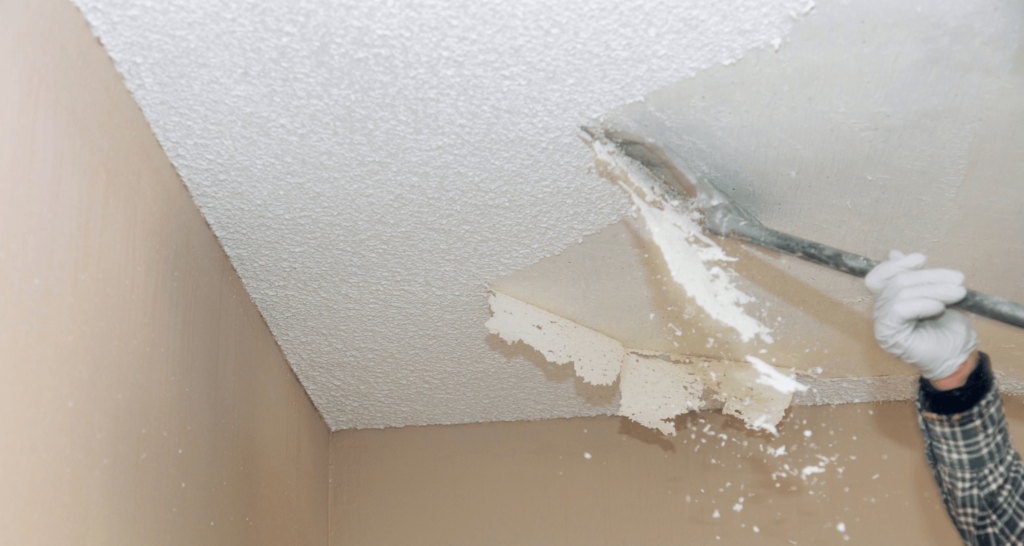 How Much Does Popcorn Ceiling Removal Cost?

Popcorn Ceiling Removal Cost – A popcorn ceiling, also called an acoustic or cottage cheese ceiling is used in reference to an interior ceiling that is covered with an outdated and textured look, giving off the feeling of a similarity to the popped kernels of popcorn.

From the 1950s up till the 1980s, popcorn ceilings were referred to being invented in order to hide imperfections which would otherwise be apparent in expansive ceilings. They were very popular back then but not anymore. In today’s world, popcorn ceilings are a sign signifying outdated property which is unattractive and in the need of being updated.

Popcorn ceilings may be removed from existing structures before buying or selling a home, or for the purpose of having a house remodeled. In certain cases, the removal process can be quite straightforward, while at times, challenges could arise when dealing with the presence of asbestos in a ceiling.

Knowing When to Remove Popcorn Ceilings

Popcorn ceilings should be removed from a house in the following instances:

Because popcorn ceilings can be highly expensive to get repaired or repainted, the best option is to remove them. Another reason to have popcorn ceilings removed is because they are very unattractive and unappealing to the eyes.

Using asbestos in popcorn ceilings was very common and also legal prior to 1977. However, there was a risk of asbestos to all homes that were built with popcorn ceilings before that time. The risk brought on by asbestos is that it can cause cancer as well as respiratory diseases.

Therefore, it’s important to check for asbestos before the Popcorn Ceiling Removal as they have a huge impact on the safety and health standards during the removal process. When testing for asbestos, homeowners should spray a part of the popcorn ceiling with water and remove a small sample in order to have it checked at a testing facility. Lab tests, depending on the length of time and the type of lab, can be conducted for $10 to $60.

Methods of Removing a Popcorn Ceiling

The method of Popcorn Ceiling Removal is greatly related to the presence or absence of asbestos in them. Asbestos are harmful and hazardous to health and if they are in fact present in a popcorn ceiling, professionals should be called in to remove the textured paint by sealing the area for safety measures.

If there is no presence of asbestos in a popcorn ceiling, the Popcorn Ceiling removal procedure will not be as costly and can be done in the following ways:

The appearance of a house cannot be updated just by having the popcorn texture removed. Scraping off the texture can leave stains and marks on the ceiling. In such case, the ceiling can be re-textured by sanding it down to obtain a smoother, flatter surface, after which it can be primed and painted for a modernized look. This can further add to the costs of the Popcorn Ceiling Removal Cost process.

Soon after the removal of popcorn ceilings, the ceilings need to be painted. This is why it is best to hire a painting company to complete the entire project.